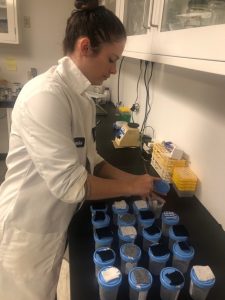 When you think about technology, do you imagine yoga pants or bath towels? Probably not. But thanks to textile researchers, antimicrobial technologies are poised for a huge positive impact on your wardrobe, the used clothing industry, and the environment.

How Are Antimicrobial Technologies Developed and Why Are They Important?

It’s people like Yihong Li, Microban’s senior technical manager for the textile technical group and AATCC RA31 Antimicrobial Committee member, who focus deeply on developing new antimicrobial technologies and manufacturing processes. Because these treatments are normally at the end of the textile process, Li and her team ensure the treatments don’t alter the other properties of the textile. For example, Li notes that the color and texture of the fabric must remain unchanged, and the antimicrobials cannot be allowed to alter other treatments such as heat resistance or fire retardants.

“Whatever odor controlling treatments the team devises must not change the texture or color of the fabric.”

Even though the focus is on odor control, antimicrobial technologies have a huge impact on sustainability. Li’s team devises processes that reduce the carbon footprint all along the value chain. By reducing water, energy, and waste in the manufacturing process and making garments more durable so they last longer and need less frequent washing, antimicrobial treatments create new value for the fashion industry, consumers, and the planet.

The Evolution of Antimicrobial Technologies

Robert Monticello, AATCC RA31 Antimicrobial Committee member, ASTM E35.15 Committee Vice-Chair, Co-founder of the International Antimicrobial Council, President at Consolidated Pathways, and a consultant for several international industry standards committees, has been working with antimicrobial textiles for more than 25 years. With a Ph.D. in microbiology and biochemistry, Monticello has seen the evolution of antimicrobials go from focusing solely on destroying microbes to creating treatments that combat all kinds of odors while also helping textiles last longer.

“What we’re trying to do with these antimicrobial treatments is to make the textile last longer.”

At the end of the day, it is all about odors on textiles. Generally, when you think about odors on textiles, it is the result of bacteria on our skin and nutrients in our sweat getting absorbed into the fabric and growing there. As the bacteria grow, they produce odors. According to Monticello, there are two ways to combat odor-producing bacteria.

Alternatively, treatments can make fabrics resistant to microbial growth. This works by creating surfaces that either make it impossible for odor-causing bacteria to attach to the fabric or the surface destroys the bacteria on contact. If bacteria are not able to adhere to fabric, they bounce off or are physically destroyed instead and can’t grow and cause odors.

At Consolidated Pathways, not only do they develop antimicrobial products, but they also ensure that the suppliers they use meet regulatory requirements for the end use purpose. In other words, only products designed for socks, towels, sheeting, etc. can be used on those products. The team even goes into stores where antimicrobial textiles are sold to purchase the products to perform quality assurance testing to verify that the products meet the performance claims. The latest testing techniques put bacteria on the fabric and instead of measuring whether bacteria are dying or growing, measure whether a particular odor molecule such as isovaleric acid or ammonia is being produced. Although the science is complicated, it works well for testing odor reduction.

Amid Covid-19, demand for antimicrobial textiles skyrocketed. Even now, the demand is strong. Customers who became more aware of pathogens now remain vigilant. Many who spent more than a year working from home found athleisure wear the perfect wardrobe for their new daily routines. The great thing about athleisure wear is that these technical textiles often include antimicrobial treatments built into them. Because of that, they eliminate odors for a longer time between washings and extend the life of the garment.

How Antimicrobials Fit into The Upcycled and Recycled Clothing Trend

Fast fashion is a term used to describe cheaply made clothing brought to market rapidly to satisfy changing consumer tastes. It is great for young people with limited budgets, but it is terrible for the environment. According to Earth.org, fashion production makes up 10% of total global carbon emissions and is projected to increase by 60% by 2030.

As a fashion marketing expert, Angie Karsama, sales and marketing manager for Consolidated Pathways, tracks fashion trends closely. And one of the biggest trends she sees is the growth of the second-hand clothing industry. Whether it is an uptick in people looking to affordably revamp their wardrobes as they return to the office or consumers experiencing eco anxiety, there is strong interest in the used clothing market. Upcycling, clothing rentals and capsule wardrobes are part of this trend.

Ultimately, Karsama sees a cradle-to-cradle model where clothing gets recycled to make new clothing instead of heading to the landfill. And companies such as Consolidated Pathways can partner with fabric recycling operations to reapply antimicrobials that extend the life of the clothing even further—from 50 to 100 wash cycles.

What’s On the Horizon for Antimicrobial Technologies?

Karsama thinks that consumer education will help create even more demand for antimicrobial and anti-odor technologies. After all, consumers expect things like towels and sheeting to repel odors and microbes just as they expect comfort, performance, and durability.

“Antimicrobials are not add-ons. They should be built in.” 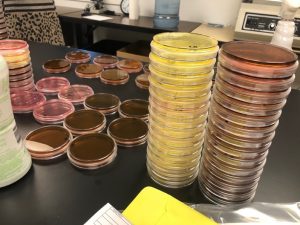 Bacteria incubated on agar plates in the IAC lab as part of the anti-odor and antimicrobial testing scheme. Photo courtesy of the International Antimicrobial Council.

Historically, antimicrobial treatments have not been very sustainable—especially the manufacturing process which sometimes results in toxic waste. In the past, particles containing antimicrobials were added to the fabric in a way that allowed them to eventually break loose and release antimicrobials into the environment. Now, through innovative chemistry, the antimicrobial agent is bound to the fabric’s surface in a way that it never separates from the fabric. These new technologies prevent bacterial growth before they can even attach to the surface. Additionally, with new innovations in polymer chemistry, the amount of antimicrobial (such as silver) is significantly smaller than previous products with the same or greater effectiveness.

As Monticello notes, if we use a different approach to controlling odor through antimicrobial treatments, we can do the job with a lot less product. We’re not trying to disinfect these fabrics; we’re just trying to contain the growth of the bacteria. It’s a different philosophy. Now we look at how to prevent the growth of bacteria on a surface —whether we kill them on contact or simply prevent them from attaching. There is even a group out of Ghent University, in Belgium, that is putting probiotics on fabrics. So, they’re contaminating fabrics with harmless bacteria that could prevent the growth of odor-causing bacteria.

Sustainability is a driving force behind new innovations in the antimicrobial textile industry. From conserving water to incorporating more bio-based materials, there are many impactful innovations available on the market today. For example, ProTecht PAO is a plant-based anti-odor technology that was developed from sustainable farms to specifically control odors on textiles. It is applied to textile products to adsorb unpleasant odors which can extend the time between washes. According to ProTecht, extending a textile’s use as few as seven times before washing amounts to an 86% reduction in carbon dioxide emissions, water, and energy consumption. Even though ProTecht PAO is designed to minimize how often a fabric needs to be washed, it has been shown to be durable to at least 50 washes.

Here are other sustainability-focused antimicrobial and anti odor innovations:

Gina Clifford is a professional communications strategy consultant and futures thinker who enjoys helping organizations craft unique technology stories in many formats to think more provocatively about the future.