Researchers at Texas Tech University in the US have developed a better filtration method to remove toxic dyes from wastewater. Jessica Owen reports. 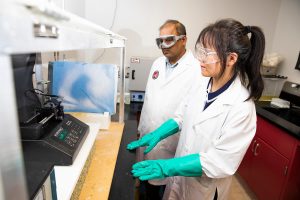 When fabrics are dyed, one of the final stages is the washing process, which helps to both set the dye in the fabric and remove any excess product. The problem, however, is that after the dyeing process, the water is contaminated with leftover synthetic dyes and pigments – up to 200,000 tons each year, by some estimates.

Most of the dyes persist in the environment because of the inefficient, non-environmentally friendly conventional wastewater treatment processes and the fact that the dyes are designed to hold up to light, temperature and detergents – the very things that might be used to clean them.

But now, a team of Texas Tech University researchers working in advanced textiles has found a new way to remove toxic dye pollutants from wastewater, and their approach is safer, cheaper and easier than traditional methods.

Their results are described in the upcoming cover article of the online journal Particle & Particle Systems Characterization. 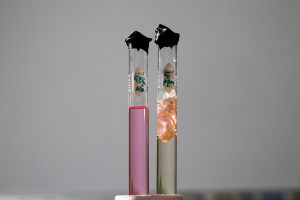 The degradation process after 14 hours

The new process involves a way to decay the dye by filtering the water through special nanofibre webs and exposing it to visual light – a process called photodegradation.

“It is green, renewable and environmentally friendly,” says Seshadri Ramkumar, a professor in the Texas Tech Department of Environmental Toxicology.

“Using visible light for photodegradation is not harmful, and it’s cost-effective and easy to operate. It makes the colour removal in the industry economical.”

The research uses poly(vinylidene fluoride) nano webs, which include functional titanium dioxide. When visible rays fall into the functionalised web, the toxic dye (here RhB) gets to an excited state.

“This helps to trap oxygen and water that becomes strong oxidants,” explains Ramkumar.

“The research focused on toxic dye removal because it is a persistent challenge for the textile industry,” Ramkumar adds. 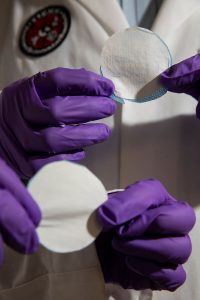 Ramkumar says that currently there are three main methods regarding treatment processes. Firstly, chemical means such as oxidation, ozonation and electrochemical systems can be used to filter the water of dyes.

You can also use methods such as adsorption and filtration. “In this particular aspect, in the past our laboratory has been successful with absorbing toxic oil using natural absorbents,” he says. “This has resulted in the commercialisation of mats known as Towelie.”

Finally, microbes can be utilised to treat water. Apparently, there has been research that uses duckweeds and rice straw to treat effluent, for example.

Removing the colour compounds is one of the most difficult tasks confronted by wastewater treatment plants because the dyes and pigments do not easily biodegrade. It’s also one of the most important tasks because of the threat these dyes can pose to the human ecosystem.

“RhB is a highly water‐soluble chemical compound and widely used colorant in textiles. However, the wastewater with RhB may cause irritation to the skin, eyes and respiratory tracts of human beings and animals. Moreover, several health issues, such as neurotoxicity, carcinogenicity, reproductive toxicity and developmental toxicity, arise due to RhB wastewater.”

Based upon their success with RhB, the team’s next step is to try the same method with other types of synthetic and natural dyes, including methyl orange, methylene blue and reactive blue 19.

These results are important for several reasons. In addition to the nanoparticle/nanofibre web’s success in removing the dye using visible light is its ability to do so without much secondary contamination.

“Our research is multidisciplinary and addresses an important problem for the global textile sector,” Ramkumar adds. “After finishing the photodegradation process, the composite can be easily removed from water without leaving much harmful residue.”

So far, the research has proven successful at the laboratory level. Now, there is need to scale up in a cost-effective way. Although nanofibres have entered into the commercial arena, Ramkumar says that other cost-effective, high surface area base substrates can be explored, which they plan to do in the near future.

Support for this research was provided by the Texas Tech Graduate School and the American Association of Textile Chemists and Colorists.

“I and my graduate student Lihua want to than the AATCC Foundation for providing graduate student research support in my laboratory. Lihua received this from AATCC. This helped us to come out with a useful research on sunlight based degradation of dyes (RhB).”